By Zack BaddorfAugust 12, 2020News
No Comments 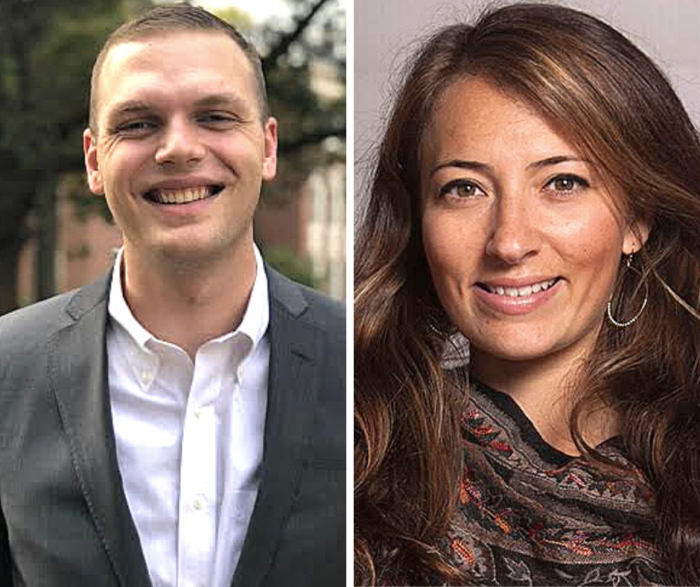 Mentorship plays a key role in shaping professional and personal development in both the military and civilian sector. One of the main resources offered by Military Veterans in Journalism is its mentorship program, where a newly-transitioned veteran is paired up with an experienced media professional. Mentors and mentees have the opportunity to learn from one another within the program.

Director of Digital Strategy and Content Babee Garcia understands the value and importance of having a mentor in journalism.

“Networking is crucial in journalism,” said Babee Garcia. “This mentorship program helps build confidence and credibility for our mentees. Few of them earn success on their own, and need someone with insight to advance them in their careers. From personal experience, I am lucky to have great mentors, to include college professors and MVJ President Russell Midori.”

Davis Winkie, a Human Resources Officer (42B) in the Army National Guard, has many accomplishments under his belt, including a tour as an Administrative Officer for an engineering task force that planned field hospitals in North Carolina during COVID-19. Prior to his military service, he was a historian with a desire to research and write. He noticed the similarities between historians and journalists as both work to find the truth within storytelling. Determined to combine his skills and experiences, Winkie found his purpose —reporting with immediacy and a sense of urgency.

Since being a part of Military Veterans in Journalism’s mentorship program, Winkie has had a byline in The New Republic, Task & Purpose, VICE, and other national news publications. Winkie encourages veterans, who are pursuing a career in journalism, to take advantage of the tools and opportunities offered at MVJ. 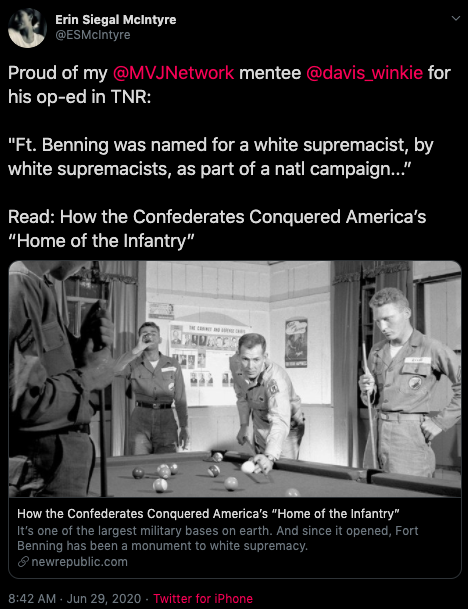 “Programs like MVJ’s mentorship are extremely important to folks like me without traditional journalism backgrounds who have potential, but just need a little guidance,” said Davis Winkie.

He is currently still training in the U.S. Army National Guard while working as a freelancer and a contract job with the Digital Library of Georgia. He is building a digital exhibit about the history of racial violence in his hometown of Forsyth County, GA.

Erin Siegal McIntyre is an accomplished investigative journalist and author. In 2012, Beacon Press published her award-winning book “Finding Fernanda”- the basis for an hour-long CBS special investigation that was awarded a 2015 News Emmy. Throughout most of her career, she has been a freelancer, who published stories in the New Yorker, the Atlantic, the New York Times, Rolling Stone, Latino USA, and various other media outlets.

For McIntyre, this has been her first time providing guidance for her mentee. She speaks highly about Winkie’s work ethic and how the experience has been both instructive and inspiring.

“I’ve been impressed with his high level of organization, his excellent and prompt communication, his wit and humor, and his ability to consider immediate and long-term career options simultaneously—not to mention drafting and publishing pieces while on duty,” said Erin Siegal McIntyre. “Who wouldn’t be impressed? Vets have a skillset that lends itself well to both collecting and organizing information, which is basically the core of what journalists do. He’s also ambitious, which is a quality any journalist needs in today’s market. When I was starting out, many of my opportunities arose from the kindness of others. It’s really satisfying for me now to be able to open doors and help the next generation.”

McIntyre recalls a long phone conversation with Winkie, where they shared insight on professional networking, strategic planning, resumes, cover letters, planning a career trajectory, and other important building blocks to sustain a successful journey into journalism. They spoke about one of Winkie’s stories, brainstorming how to approach certain sources, and how to acquire certain kinds of information.

“I was so surprised to hear how fluent he is in public records requests; that’s a quality of utmost importance and he’s already very experienced,” said Erin Siegal McIntyre.

In some instances, McIntyre became the student, as Winkie taught her about his area of expertise.

“Davis was recently a PhD student in history at UNC-Chapel Hill, immersed in academic writing, research, and classroom instruction, and so our conversation ended with the tables being flipped: he gave me some advice on university culture and provided an insider’s on-the-ground perspective on the institution’s more recent history related to Confederate monuments on campus,” said Erin Siegal McIntyre.

She also spoke positively about giving back through mentorship and how it helps other journalists, saying “It’s nearly impossible to get anywhere in journalism without a robust network and a few people guiding you, at least a little. Even informal mentorship can be of outsize value; my fellow journalists are almost entirely accessible, generous, and kind…Those of us already working in the field consider it a privilege to help and pass along what we’ve learned.”