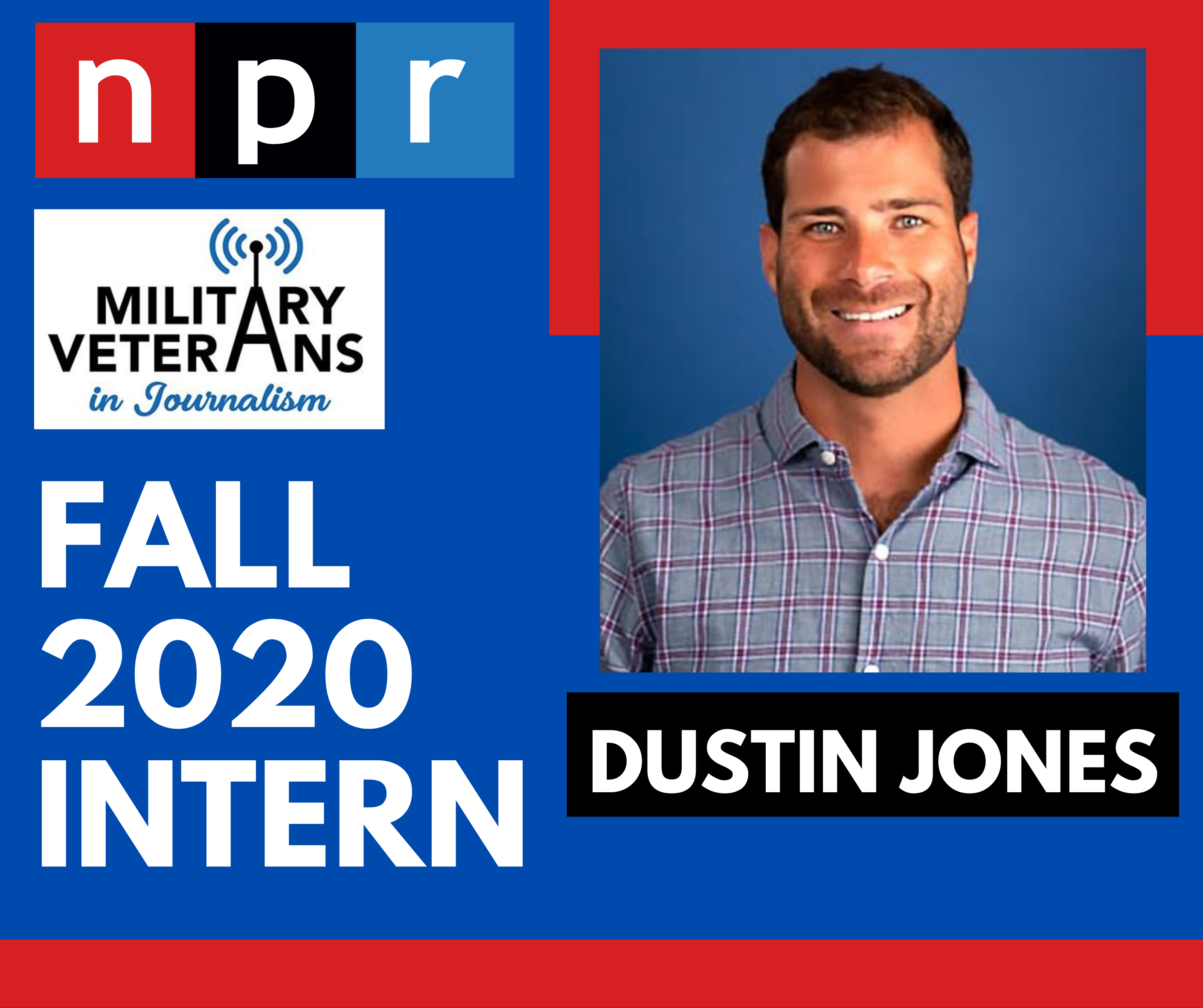 Dustin provided an update on what he has been working on since September.

“I have focused on the wildfires in California, tracking down and interviewing sources for the Weekend edition All Things Considered,” Dustin writes. “One story was about former incarcerated persons who hope to become fire fighters after serving their sentences. Another story was about the wildfires near Santa Rosa, CA and how the increasing intensity of wildfire season is making residents reconsider their choice to live in California.”

“NPR has long been a beacon in broadcast journalism, and their work to expand the diversity of their staff shows they will lead and innovate within our beloved field for generations to come,” MVJ President Russell Midori said. “Dustin’s work will inform you, inspire you, and break your heart. People trust him with their stories – stories they might never tell anyone else.”

Dustin spent four years in the Marine Corps from 2007-2011. He served on two combat deployments in Iraq and Afghanistan in the First Battalion Third Marine Regiment. Within that time, he exemplified strong leadership while selecting and training new platoon members. He also has won multiple awards, including two meritorious promotions and was selected as Marine of the Quarter.

While deployed to Afghanistan in 2009-2010, journalists from The New York Times were at his small patrol base. Marine Corps veteran turned journalist CJ Chivers and Photographer Tyler Hicks wrote several stories about Dustin’s unit and his friends. His passion and purpose for journalism flourished from the stories they covered.

“I realized that was what I wanted to do when I left the military, share people’s stories,” Dustin said. “So after leaving the Marines in 2011, I attended the University of Colorado, where I studied journalism and photography. I worked as a reporter and news manager for a small Montana paper for a year and a half before attending Columbia University Graduate School of Journalism, where I received my masters in journalism with a focus in documentary production.

Despite his accomplishments and familiarity with weapon systems, land navigation survival tactics, and training, the military did not fully prepare him for a career in journalism.  Dustin spoke candidly about obstacles in getting his big break.

“I didn’t have much help after leaving the military, which definitely made the transition harder than expected. Classes were not particularly hard because of the work ethic I developed in the Marines, but I didn’t have many networking opportunities. When I graduated in 2015, it took me over a year to find a journalism job, which brought me to Montana in January of 2017,” Dustin said.

Dustin is now a well-rounded storyteller with skills in photography, writing, editing, and video production. He is currently producing a film about a Marine struggling with PTSD and suicidal tendencies in a VA inpatient program.

He is grateful that Military Veterans in Journalism secured an opportunity like this to help shape his professional growth further in journalism.

“My chances for landing the internship went up drastically because of the efforts of MVJ. I am also working with mentors to try and map out a career path and finding a home for some of my other work,” Dustin said.

Kristin Van Meerbeke has worked as the Talent Operations and Intern Program Manager at NPR for over two years.  She assists with on-boarding new employees, works with our temporary employee population, and manages the intern program at NPR.

“We canceled our summer 2020 program because of COVID as we weren’t ready to pivot to a remote program so quickly and we wanted to make sure we were not only providing a rich experience for our interns; but also supporting our staff,” Kristin said. “We didn’t think we could do that so soon; but we brought our program back this fall in a fully remote capacity. We limited the number of positions from our typical 60+ to about 34 interns anticipating there would be some new and unique challenges offering our program remotely for the first time.”

An internship is a great way to get started in journalism. It allows for networking and getting hands-on experience, positioning one for a full time role. With NPR, interns will gain exposure to training, its daily operations, and work alongside world-class journalism professionals.